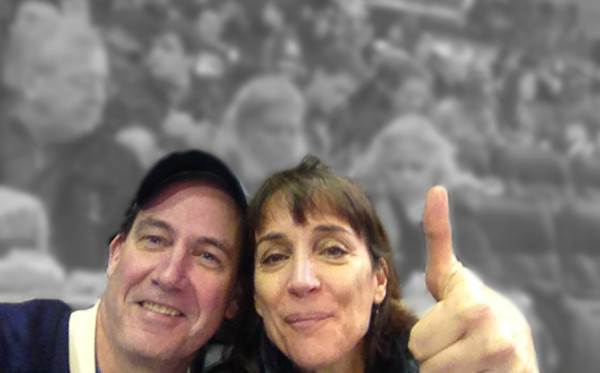 Twenty Years Of Hope: A Conversation With John Sadik-Khan

John Sadik-Khan was diagnosed with chronic lymphocytic leukemia (CLL) more than 20 years ago. At 37, he was unusually young to be diagnosed with CLL, a blood cancer that affects a type of white blood cell known as lymphocytes. As leukemia cells crowd out normal cells, first in the bone marrow and then in the blood, lymph nodes, spleen and liver, people begin to experience fatigue, shortness of breath, fever and increased risk of infections.

While CLL can be slower growing than acute forms of leukemia, it is difficult to cure and at the time John was diagnosed, there were few options. Since then, he has undergone multiple treatments, including a stem cell transplant, but each time his disease came back, there was a new treatment option available or in a clinical trial, sometimes just in the nick of time.

As we strive to discover and develop therapies for cancer and genetic diseases, John’s story provides a poignant reminder of the urgency and importance of our work here at Syros and at companies across the biotech industry. Each day matters.

Syros: How were you diagnosed and what treatment options were available at the time?

John Sadik-Khan: I was diagnosed in 1999 after routine bloodwork during a physical turned up some irregularities. I was referred an oncologist who recommended that I start the standard chemotherapy regime, FCR – a combination of fludarabine, cyclophosphamide and rituximab.

At the urging of my dad, I talked to another oncologist at Memorial Sloan Kettering Cancer Center who advised the opposite: wait until I was symptomatic, then administer the FCR drugs sequentially, not in combination.

These contradictory opinions probably reflected the uncertainty about the standard of care for CLL at the time. But what the oncologist at Memorial Sloan Kettering said just made more sense to me. I was 37, married with three kids under the age of 10, and in good health. It was an easy decision to follow his advice and defer treatment.

For several years, we practiced “watchful waiting.” My blood counts and lymph nodes were checked every six months, and I had periodic CT scans and bone marrow biopsies. Eventually I started to feel symptoms like fatigue, and the test results showed it was time to start the sequential FCR treatment.

Syros: That course of treatment initially controlled your disease, right?

JSK: Yes, it did. But in 2009, I had my first relapse. I tried another chemotherapy plus rituximab, which only generated a partial response. At the same time, I learned I had a 17p deletion. Although today there are drugs that work well regardless of that deletion, back then it was associated with poor prognosis and only a few years of survival. This was a low point for me.

In 2010, I began a course of thalidomide to condition me for a stem cell transplant. Before the transplant, I went for drinks with a friend who had multiple myeloma, another type of blood cancer that had been transformed from a death sentence to a more chronic disease with the approval of multiple new therapies. He hammered home this philosophy: Do what you need to stay alive now because the medical profession is always finding new treatments. I was skeptical, but I kept going.

Once the transplant took hold, I felt good. But after a year, the leukemia returned. This was another low point with the disease, because now we were looking for salvage therapies.

In the nick of time, though, we found a small clinical trial that was just starting for an investigational therapy that had shown promise in CLL patients with 17p deletions like mine. I was admitted to the trial after four attempts to qualify. My disease burden was too high the first three times. I was lucky to get in because it wasn’t going to be pretty if I didn’t!

The drug worked for three or four years, then stopped. I couldn’t get out of bed. I was exhausted. It was pretty awful and I really felt like the disease was winning. But by then another therapy was available. I’ve been on that since and it’s working well for me.

Syros: What kind of side effects did you have with the various treatments?

JSK: The stem cell transplant was pretty rough. The drugs have all had some side effects, but nothing I can’t handle. I’ve been able to live my life, watch my kids grow up, be part of their lives, work, and be active.

Syros: Given your relapses, do you worry about what might happen next?

JSK: For a period in my journey, “what’s next” was definitely on the top of my mind. The possibility of relapse is considerably less worrying now that there are new treatment options and many others in development: cell therapies, gene therapies and immune therapies.

In retrospect, I realize my friend was right to tell me to hang on, because every time I relapsed, there was a new therapy I could try. I’ve been pretty lucky in that regard.

Syros: What’s the most urgent need for CLL patients now?

JSK: I think it would help patients if their doctors gave them a better understanding about the portfolio of treatment options, right at the beginning. Doctors often focus on, “Here’s what you need to do right now,” not on what might come next. It’s what they do. But when a therapy stops working, the floor comes out from under you. It would be comforting for a patient to know there are more arrows in the quiver – before the first one fails.

Syros: Thank you for sharing your journey.