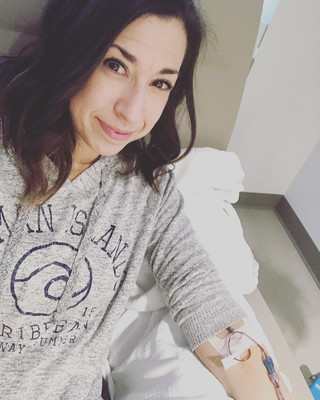 Living with beta thalassemia: A conversation with Tracy Antonelli

Beta thalassemia is a rare genetic blood disorder in which the body makes abnormal hemoglobin, the protein in red blood cells that carries oxygen throughout the body. The abnormal blood cells lead to anemia and other medical problems, including organ-related complications from the disease itself as well as from the build-up of excess iron that can occur from repeated blood transfusions.

Syros is collaborating with Global Blood Therapeutics to develop an oral medicine to switch on the fetal hemoglobin gene, which is typically turned off after birth. By turning on the fetal hemoglobin gene to make healthy red blood cells, the companies aim to provide a functional cure for patients with beta thalassemia and sickle cell disease, which is also caused by an inherited defect in the adult globin gene.

To better understand what “living with beta thalassemia” means, Syros sat down with Tracy Antonelli to talk about her journey with the disease, from the time of her diagnosis as a child to the present as the mother of three adopted daughters who also have beta thalassemia.

Syros: Could you describe the type of thalassemia that you have and how it was diagnosed?

Tracy Antonelli: Thank you for having me, and for the work you are doing on beta thalassemia.

I was diagnosed when I was four years old. I had a GI bug and was admitted to the hospital because I was dehydrated. My lab tests showed I was quite anemic. The doctor knew my parents were of Italian descent and thalassemia is common in Italians – and in other ethnic groups – so he told them I might have thalassemia.

My dad said, “I never heard of that thing.” My mom said, “I know she doesn’t have it because I don’t.”

So my diagnosis was a surprise to everyone. But genetic tests showed each of my parents was a carrier for the thalassemia trait and I had inherited two defective genes, one from each of them. Genetic testing in my extended family showed several members carry the trait, too.

Syros: You mentioned that blood transfusions for thalassemia intermedia don’t necessarily begin in childhood. What was the first stage in your treatment?

TA: My spleen was removed when I was five or six. The idea was to get a pop in hemoglobin levels. We know now that doesn’t work really well but, back in the 1970s, many patients had their spleens removed. When you don’t have a spleen, you’re at increased risk of infections. Every time I got a fever as a kid, I went to the ER or was admitted to the hospital.

Syros: How else did thalassemia affect you?

TA: In my 20s, I started having some of the comorbidities that happen in patients who aren’t transfused. I had my gall bladder removed because it was full of biliary stones from years of breaking down my crummy red blood cells. Around this the time, we also found I was very iron-overloaded. To remove the excess iron from my blood, I started taking a chelation medicine. It’s given as an infusion, and I had to wear a pump for 12 hours a day.

So here I am in my 30s, married, working a busy job as a clinical researcher running clinical trials, traveling, going to the gym to the best of my ability, and also having to find 12 hours a day to wear this pump. Emotionally, it was difficult to deal with, and it’s also unpleasant. You get itchy at the infusion site. You can find yourself itching in the middle of the night and ripping the tube out of your body.

I just made it part of my life, something I had to do every day. Every night, my husband helped me put in my “pinchy,” as we called it, and we didn’t have our tea or watch TV until we did that.

Syros: When did you have to start infusions, and why?

TA: Over time, my hemoglobin dropped to 7, which is really low. So in my 30s, I was dealing with profound anemia. I was always weighing this cost-benefit decision: do I want to be on transfusions or am I OK living in this anemic state?

I had my first transfusion in my mid-30s, after getting a febrile illness. After that, every year when an illness went around, I would get a transfusion to help me through it. But when I was about 40, some tests showed early signs of pulmonary hypertension. So I started getting transfusions every three weeks, that’s been my life since then.

Syros: Was that a difficult transition for you to make and to accept?

TA: Before I started transfusions, I used to be worried about feeling addicted to them. And I do, but in a good way, because I feel better now. I used to have palpitations and shortness of breath. I was so anemic and so tired that there were times I would have to crawl up the stairs in my house. I’d even plan my trip upstairs only when I’d figured out everything I wanted to get from up there.

When I look back, I see that was not a great way to live. I feel good now and I am OK with the transfusions. I can feel when I need blood. I walk every day, and as my transfusion day approaches, I notice, “Oh yeah, that hill feels extra steep today.”

That’s been my medical journey with beta thalassemia. Because of all of comorbidities I’ve had, I’m sort of a walking textbook for it.

Syros: It’s also become a family journey, because you and your husband have adopted three girls from China who have beta thalassemia. Tell us about that.

TA: As far as I know, we could have had biological children but we chose to adopt. It was something I always wanted to do. I can remember being really young and hearing about children being abandoned in China because of the one-child policy.

One day I got an email that said, “You have a child waiting.” I thought, “No, I don’t. We’re living in a one-bed apartment.” But for some reason, I clicked on the email and there was a picture of a little girl – my oldest – and it said she had thalassemia.

My husband Patrick was drying dishes and I called him over to look at this little girl. I asked,  “Should we adopt her? He looked at her picture and said, “Yeah, let’s do it.” And let me tell you, we never make decisions that easily, ever – not where to go to dinner or which direction to take a walk. So that’s how we adopted our first daughter.

We went back two more times and adopted two more girls with thalassemia. All three have thalassemia major, so they get transfusions every three weeks.

Syros: How has having three daughters with beta thalassemia changed your perspective on the disease – and on yourself?

TA: I am experiencing thalassemia in lots of different ways as a patient and a parent. I have such a deep understanding of what the girls are going through. We joke that my husband is the odd man out because he doesn’t get his blood out of a bag! But we’re all supportive of each other. It’s been a blessing for all of us to have each other and experience thalassemia together.

So I would say my life with thalassemia is a lemons-to-lemonade story. Thalassemia has brought a lot to my life. Of course, I want things to get better for patients. I’m excited about new treatments, and I’m waiting for a cure. But we’re lucky here in the U.S. We have a blood supply, even though we’re worried about blood shortages now because of coronavirus. But places like China have blood shortages all the time, and children in orphanages die as a result. That doesn’t happen here.

Syros: Another part of your life is being an advocate about beta thalassemia. What advice would you give to a medical student who was just starting down the path to becoming a doctor?

TA: I would tell them that sometimes the patient is the expert. Many physicians who treat adults have no experience with thalassemia because patients used to die in their 20s. The disease is rare and my type, thalassemia intermedia, is rarer still. So I’ve had to be my own advocate, especially when I’m away from my regular caregivers.

A lot of the education comes when working with people who’ve never seen a patient like me before. The key has been understanding my disorder and using my voice as best as can when I am out of my element. I know I can advocate for myself and for my daughters.

Syros: What advances in treatment would you like to see happen?

TA: We definitely need better oral chelators because each one now has its drawbacks. There was a time I was on oral chelator, but I had problems with it and had to stop so now I use a pump again. It would be nice for thalassemia patients to have more choices for chelation therapy.

Beyond that, what I’d like is anything that lets us live more like other people, makes our lives easier, and gets time back for us, so we’re not spending so much time on our disease.

When I was little, my mom used to tell me that one day there would be a pill for beta thalassemia. I really hope to see that one day, for me and especially my girls.

Syros: We’re having this conversation during the COVID-19 pandemic. How has that affected your ongoing use of the healthcare system, especially given the risk of infection?

TA: Thank you so much for asking that. Going to the hospital is part of our lives, but I have lot of anxiety around that now. Before I never thought twice about using the bathroom at the transfusion center, or hugging the nurses we see all of the time. Now, that’s super-scary. This puts the seriousness of beta thalassemia in perspective: we’re still going to hospital because transfusions are not elective.

The social distancing is hard in that situation, too. Last time we had our transfusions, the girls all had to be in separate rooms, which was a bit traumatic for my youngest daughter.

Also because of COVID-19, there’s a lot of blood that’s not being collected so hospitals are being more careful with the supplies they have. So maybe one of us won’t get that second unit of blood we really need and we’ll have to try to get by on a “lower dose.” It’s scary to think this might reach the point that my daughters won’t be able to get their full amount of blood.

That’s why I have been encouraging everyone to donate. If the donation center is booked up, make an appointment for later. Donation centers are telling me, “We’re worried about what will happen four weeks from now.”

This request isn’t just for me, my girls and thalassemia patients. It’s for everyone reading this. Someone you know might need blood.

Syros: Tracy, thank you so much for sharing your experiences with us. What an amazing story about you and your girls. Best wishes to all of you.